Rocky Mountain Short Takes on Suicide Prevention: A Conversation with Dr. Michael Kauth - A Lifetime of Achievement in Veterans Care 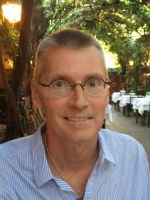 Dr. Michael Kauth is a clinical psychologist and has two major roles in the VA. He is Director of the VHA LGBT Health Program – a position shared with Dr. Jillian Shipherd – and he is also Co-Director of the South Central Mental Illness Research, Education and Clinical Center. In addition, Dr. Kauth is a professor in the Department of Psychiatry at Baylor College of Medicine in Houston, TX. Recently he received The American Psychological Association, Division 18, James Besyner Award for Lifetime Achievement and later this week he and Dr. Shipherd will be receive the 2018 Achievement Award from the Gay/Lesbian Medical Association in Las Vegas. I have known Michael for almost 15 years beginning when he was the National Educational Director for MIRECC/CoE and I maintained the website. I caught up with Michael to reflect on his work and get his view of the future.